The History of the Presentation 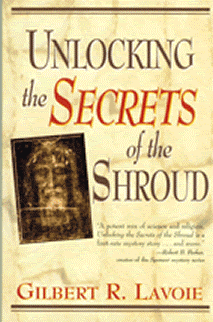 In my first year of seminary work (1999), Dr. Gilbert Lavoie (an internationally known researcher of the Shroud) came to St. Johnâ€™s Seminary to give a talk on this cloth called the Shroud of Turin. I actually missed the talk because I was working our seminary switchboard at the time (I also was not very interested in this cloth since I went to an exhibit on the shroud in 1995 which I was totally bored at). While I did miss the talk, I heard that he was giving away free books. Being the cheapskate that I am, I decided to sneak in and get one of these freebies. His book, Unlocking the Secrets of the Shroud, sat on my bookshelf for a number of months.
[Unlocking the Secrets of the Shroud, by Dr. Gilbert Lavoie, MD.]     Eventually I got bored and I decided to pick it up and read it. I found it so interesting that I read it in one day (quite a feat for me). At blazing speed I began buying and reading through other Shroud books, both for and against its authenticity, trying to absorb all I could with regards to this amazing cloth. I also realized that in order to understand the Shroud better, I had to learn about the Crucifixion and what it was like physically. At that time, I did some investigation work to find Dr. Lavoieâ€™s address and I wrote him three letters within a few weeks of each other (I guess you could say that I had a stalking moment). He did get in contact with me and I met him, and his wife, for dinner at their house. We became good friends and he showed me his life-size pictures of the Shroud, and even allowed me to do some tracings from them!     As is my custom, when I go home to Indiana I often visit my parish grade school and give religious presentations to the classes using magic tricks. I decided to put a little something together for the Seventh and Eighth grades on the forensics of the Crucifixion and the Shroud of Turin. While it was a very small presentation, they seemed to be captivatedâ€”I was also very enthused to present it. I decided to expand this and I presented a larger presentation for my home parish and for the seminaryâ€”they also liked it. I kept going and eventually I had to trim about a half hour of the presentation due to time constraints. I advertised throughout parishes and kept collecting different pictures and artifacts to display. My parents, Kerry and Cathy, were, and are, an incredible help throughout the making and sustaining of this presentation. They contributed ideas, finances, built different props, etc. Others, too, began to contribute. Through one particular donor, I was able to get 3,500 booklets printedâ€”a sum that I am now almost out of! With this cost covered, I was free to give them out to parishes and youth programs who couldnâ€™t afford them (just as Dr. Lavoie gave out his books). To larger audiences, I was able to ask for help to cover the reprint costs and costs of the presentation. I have been amazed at how generous people have been with their time, talent, and treasure toward this presentation! It has grown and expanded far beyond my vision. I have been in six states, I was even asked to read a presentation for someone who could not make it to the International Conference on the Shroud of Turin, 2001, in Dallas, Texas! What wonders God has in store for bringing His message of love to His people!

To book a presentation for your Church or Organization, please click here!

History of the Presentation